We have been collecting, preserving, and providing access to manuscripts and photographs since 1845. The documents in our collection represent New England and many other regions. 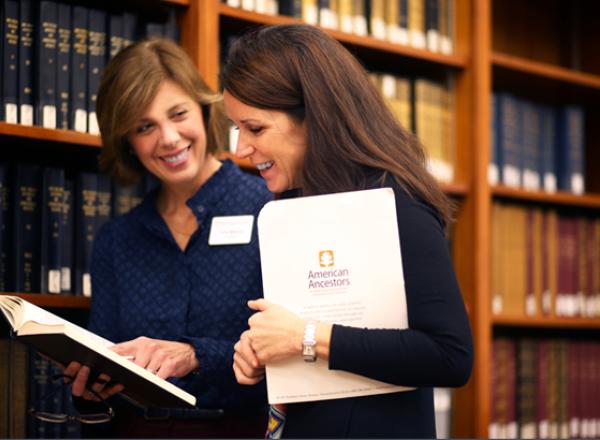 NEHGS provides online access to digital images of select materials in the R. Stanton Avery Special Collections through the Digital Library and Archive and Online Exhibits.

Manuscripts are available to NEHGS members, who are visiting the library, under the following provisions:

Guides exist for many of our larger collections. These finding aids provide a detailed description of the collection's contents. The catalog record will note if there is an inventory for that collection. Check the library catalog for a list of finding aids available online.

To assist the staff in maintaining the original order of the collections, researchers are requested to observe the following:

How do I donate materials?

NEHGS encourages our members and friends to consider donating genealogical materials, original documents, photographs, and other material to our Society. Please visit our donate materials page to learn more.

What are the rules for obtaining photocopies of materials?

NEHGS members may request photocopies of select pages from manuscripts.

All patrons accept full legal responsibility for observing the copyright law, as well as legislation concerning copyright, libel, invasion of privacy, property rights, and fair use.

NEHGS reserves the right to decline a photocopy request that, in our opinion, jeopardizes the physical condition of the material, violates copyright law, or involves a collection with restricted access. NEHGS will not photocopy documents produced prior to 1820.

The reproduction of an entire collection is prohibited; however, NEHGS will cooperate with researchers and other institutions in digitization projects whenever possible.

Permission to copy does not constitute permission to publish -- see "Publishing from NEHGS manuscript materials" below.

Can I reproduce an image or quote from materials in your collection?

The written request should include a complete citation for each item requested and a complete description of where and how the image or quote(s) will be used.

How can I engage someone to do research on materials in the collection?

The Special Collections staff will answer all requests for information about our holdings. NEHGS members can contact Research Services to hire a researcher to search through manuscript collections held by our Society.

Through the generosity of the late R. Stanton Avery (1907-1997), a special collections area was founded at NEHGS in 1998 to preserve and protect the Society's rarest and most unique treasures. Mr. Avery's daughter, Judith, continues to be actively involved in the life and activities of NEHGS, serving as a trustee of the Society and as a member of the NEHGS Council.

The staff, trustees, and members of NEHGS gratefully acknowledge and thank the Avery family for its generosity and leadership in the field of American genealogy.

From his Connecticut Avery ancestors, silversmiths and clockmakers in Preston, R. Stanton Avery inherited a knowledge of mechanics and tools, and a love of tinkering and inventing. Mr. Avery's father, Oliver Perry Avery, grew up in Stonington, Connecticut, where some of the family have lived for thirteen generations. As a teenager he lived for a time in Denver; later, after Yale Divinity School, Oliver became a Congregational minister and moved his family often, from church to church, with stops in Blaine, Washington, Portland, Oregon, and Colegrove, California.

1907: Ray Stanton Avery was born on January 13th in Oklahoma Territory to Oliver Perry Avery and Emma Miller Dickinson, a second cousin once removed of poet Emily Dickinson. Mr. Avery later put himself through Pomona College by working at a downtown mission and by printing dance programs and stationery on his father's letter press.

1935: With the assistance of his fiancée, Dorothy Durfee, and the help of friends, Mr. Avery started the Kum-Kleen Adhesive Products Company in Los Angeles. Today, Avery Dennison Corporation is a worldwide manufacturer of self-adhesive materials. In the course of his career, Mr. Avery registered 18 patents, introducing automatic label dispensers, in-line label printing machines, the popular self-adhesive postage stamp, and a host of timesaving innovations.

1970: Mr. Avery was named California Manufacturer of the Year.

1971-85: Mr. Avery was appointed Chairman of the Board of Trustees for the California Institute of Technology (Caltech).

1972-91: Mr. Avery was appointed Chairman of the Board of Trustees for the Huntington Library.

1974: Mr. Avery was named Business Man of the Year by the Harvard Business School Association of Southern California.

1994: Mr. Avery's daughter, Judith Avery, received her M.A. in History with a specialty in historic resources management from the University of California at Riverside. As part of the program, Judy was required to complete an internship, and she chose to work with the NEHGS Manuscripts Department for three months. The same year, she became a trustee of NEHGS.